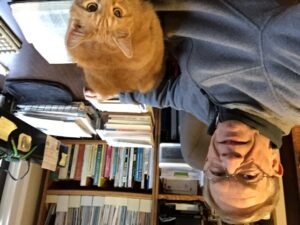 During Bible reading in the morning, Marley located himself in a place where Dewey would be sure to notice him.

After he retired from teaching, he was looking into volunteer activities locally, Dewey Beadle found an online list of volunteer opportunities, and it was there that he first saw Alley Cats Advocates.  He says’ “I believe I may have heard of Alley Cat Advocates before then, because I had talked with Karen Little a year earlier when I was facing having my cat’s hind leg amputated. Someone with Shamrock Foundation had told me that Karen had a tripod.”  After going to the ACA orientation in February of 2006, Dewey went to his first Big Fix the next month.  He still remembers hearing at the orientation that a breeding pair of cats can produce 7,200 offspring in eight years. That is good reason to have cats fixed! For a number of years at the Big Fix, Dewey would help out Sunday looking after the cats post-surgery.  He also helped with getting the Big Fix equipment stored away in the warehouse Sunday evening.   The next morning, he would help with feeding the cats and checking them again. Dewey keeps the traps in good working order and is always happy to perform “handy man” services whenever he is called upon. Being a volunteer at Alley Cat Advocates has provided Dewey an opportunity to meet new people, and get to know them.  He says that “the fellow volunteers love animals and are willing to give up some of their time to help in taking care of them.”  Dewey certainly enjoys being around cats, and he can always be found taking a moment to give a pet or a scratch to one of the cats at the office. 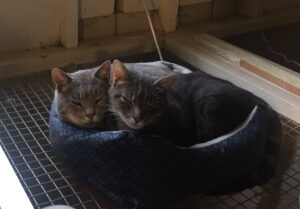 Two cats that previously lived in the kennels of a rescue before they were adopted by caretaker, Dewey Beadle.